Purchasing a camera for ranch use

My brand new Canon 7D and two kit lenses (aka, personal sacrifices instead of a single L-series lens due to the purchase of a camera body) arrived today!! I am anxiously checking the battery charger every 5 minutes, and it has been doing the whole blink-three-times-in-rapid-succession thing it supposedly does when its nearly charged for over an hour! Ugh.
Outside there is a brand new calf, another soon-to-be brand new calf, and sunshine. And to think, my husband asked me what I was doing this afternoon, and looked at me oddly when I was snappish that the 4-wheeler was nearly out of fuel.
The poor man.
The thing I have learned this time around in buying a camera body is that it's like buying cars, hydraulic chutes or mineral in that every single option on the lot is nearly perfect to hear the sales people tell it.
Uhuh. I have a 1.5 year old Canon 60D camera being sent to Canon for the second time in four months right now that was "the best thing going" a year and a half ago. I don't know if it was the same sales person or not, but when I was explaining my issues the second time they developed - a couple weeks ago, the guy replied, "Oh, well it does have an aluminum body, which is more for hobbyists than professionals. He wasn't rude about it, but put emphasis on the fact that apparently the different materials Canon makes body's out of is a big deal.
So, rewind a year and a half, when I'm explaining to someone in this very shop that while I am not a National Geographic photographer, I use my equipment like one. It is outside, in the weather, occasionally covered in substances that could have come out of either end of a bovine or pig, and needs to stand up to things like moisture, dust, slobber, LA200, etc...
At that time I was told the 60D was the best camera for the money, unless I wanted to jump into the Mark series, which I did not because my budget did not allow for upgrading to an entire set of L-series lenses, which is all you can use on a Mark body.
We discussed thoroughly the advantages and disadvantages of all options before I made my purchase. The sales consultant was confident I would be thrilled with the 60D, and I was, at first, until a year into owning it, the camera began producing grainy and dull images. For something that was by no means cheap, and projected to last years, this was an expected and upsetting development to suddenly discover when reviewing a senior photo shoot.
So, to have someone at the same shop basically say, well duh honey, it has an aluminum body, was a bit irritating.
Then began our conversation on what I should buy as a new body that will hopefully stand up to the elements I shoot in a little better. And, what does this guy tell me. He suggests the latest, greatest, camera-of-the-year 70D, which is constructed of the same hobbyist grade aluminum as the 60D.
Seriously dude?!
We go on to discuss the 6D, Mark iii and 7D as well, and I get the stats on all four options, then agree to call back with my decision. I was this close (- -) to taking the plunge and getting the Mark iii, but again the ability to not use the majority of my lenses in combination with not having several extra thousand laying around to buy new lenses with stopped me. In the end, as I said above, I went with the 7D, which is made of the professional grade magnesium alloy, after emailing someone who is a year and a half into owning and using one the same way I would, with zero issues.
So, while I am tickled pink to have a new camera body, and realize that if they can fix my 60D I will no longer have to rent a backup body for weddings in addition to a few other perks, I am also a little irked that I am not lovingly gazing at a high end, low F-stop lens that I had my heart set on purchasing in 2014.
I should also point out that I am on a bit of a soapbox on this topic at the moment, but as a whole the camera shop I use is tremendous, and incredibly helpful. The people are very knowledgeable and provide top-of-the-line customer service. I have simply come to the realization that much like buying cars, chutes or mineral, buying camera equipment should involve a lot more research than talking to "the experts," and doing online comparisons. They have no idea what to say when you explain that while you take "good care" of your equipment you need to know how it will stand up to being chewed on by a baby pig, licked by a cow, hung on a fence in its bag in light snow, 50 mph blowing dust instead of the tame variety found in studios, and the occasional coating of vaccine. You need to go find a neighbor to ask about such things in order to get a feel for how your potential purchase will work in the real world.
Posted by doublehphoto at 1:43 PM 2 comments:

It's sunny and 25 degrees above zero this morning - the only morning, or day for that matter, expected to get this warm for over a week. We have 19 calves on the ground, my dachshund is rolling around in the sunny spot on the floor, I've had to two homemade lattes, talked to a handful of people on the phone, and am curled up under a blanket telling myself to get with the interviews I need to complete, but am instead thinking a nap sounds oh so much better.
What is it about cold weather, semi-warm wood-heated old homes and the sense of calm that comes with being able to look in one corner of your house and realize it is somewhat clean during calving season that lulls you into wanting to take a day off?
I think it is in part that this is one of my favorite times of year ranching, and mother nature can dampen that enthusiasm with her nastiness, but not eliminate it. A year's planning has gone into these little calves hitting the ground this week. Their mother's survived the worst storm to ever hit a cow in this part of the country, and seeing so many signs of life and renewal after a dismal, tough winter is refreshing, and relaxing.
Perhaps its that today is sure to be the easy day of the upcoming week, what with it being relatively warm, sunny and calm. Weather is such a dictator in our lives, this year more than normal, and today is somewhat of an auto-pilot day compared to those in the near past or immediate future.
Regardless of the reason, this is an excellent day, and a nice glimpse of the fact that sooner rather than later, winter will finally give way to spring after clutching us in its nasty grasp for the last five months and counting.
Here's hoping it's a sunny, nice day in your world as well!

Posted by doublehphoto at 9:47 AM No comments: 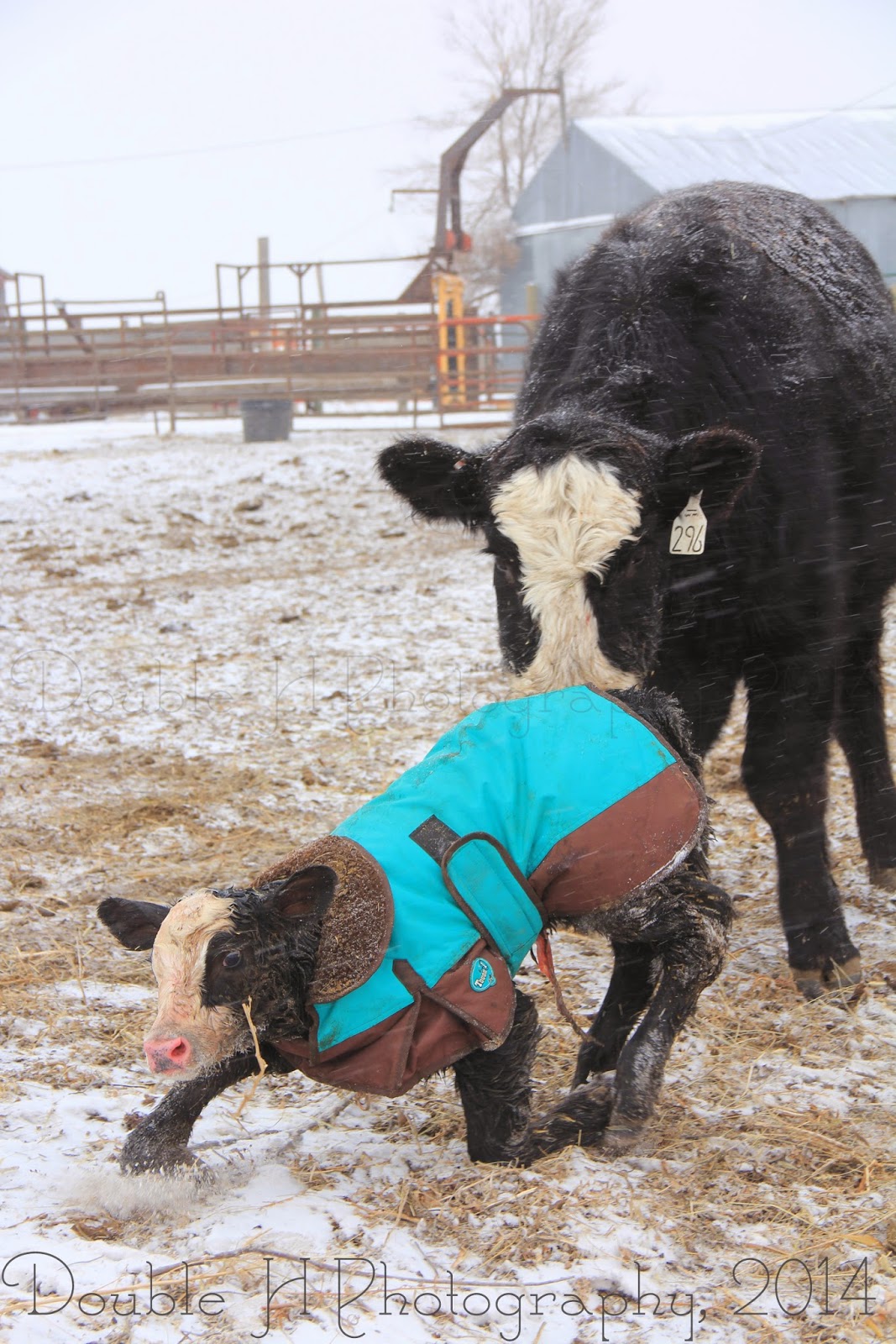 What do you do when you start calving and the high, without windchill, is somewhere around zero? For my family, one answer has been to bundle up the newborn calves in their own coat. I brought this concept with me to South Dakota this spring, where it has come in very handy. By that I mean the first four calves wore the coat until the next calf was born.
We came across this idea years ago when someone, another family member perhaps, hooked us up with an actual "calf coat." Made of weather-proof material, and designed to allow the calf to stay dry and warm while also being able to go to the bathroom without making a mess, we were instantly impressed. We had used old vests, human coats, etc... for this same purpose, but a coat designed for the shape of a calf and made from weather-proof material was a significant improvement. The not so impressive aspect was the cost - around $50 apiece in most major vet catalogs. I realize that $50 really isn't all that much to spend, but it never hurts to see if there is a better deal to be had. Plus, when you're putting a coat on an animal that has no consideration for what you paid to keep them bundled up and warm, they rudely rub it on barb wire, stomp on it, chew on it, terrorize their buddies with it, and on and on. All made possible because the same coat kept them from chilling down.
So, we got creative, and found the above dog coats at a feed store a couple years ago for $20 apiece. Score! Show is Tough1 coat in a size large on a newborn calf weighing in the mid 70-pound range. It works great for the most part. The only thing I would change about this coat, from a livestock standpoint, is that you have to put it over the calf's head. With past coats, there was a Velcro strap that went across the chest and under the belly. But, considering I can buy 5 of these coats for the cost of 2 with that Velcro option, I'm happy. It also doesn't fit every calf perfectly, and sometimes the back end flies up a little, but again the affordability, ease with which you can put it on and take it off, and the fact that it's weather-proof material keeps the calf dry and warm means it gets the job done.
What does everyone else do to keep newborn calves warm in less than ideal conditions? We also have sheds at our disposal that are often used, and tried duct taping ears on a couple little guys this year. The baby calves were not at all impressed with that idea.
Fortunately today the weather is 45 degrees above zero and sunny, meaning the calves are happy and the coat is hanging in the basement!
Posted by doublehphoto at 9:32 AM 2 comments: