I have been needing to find a good church. Going to a good service lightens my heart and enlightens my mind. So after several busy weekends, most spent out of town, I was here and able to try out a new church.
I picked Paradise Valley Christian Church primarily because it is in my target house buying neighborhood. Looked it up on the internet and service began at 10:30, ok.
As I pull off CY I immediately notice the vehicles parked up multiple side streets, which I take as a good sign. Then one of those 15 passengers vans with a Kansas bible school logo whizzes by me and my curiosity is stirred.
I'm also a little nervous because the people that drive those vans are crazy. I have seen church vans hit the ditch at 70 mph, swerve across the interstate and come to a screeching halt in the middle of the highway. I believe that God will help you through anything, but you have to do your part too, like actually drive.
Anyway... I park a good block away from building and amble towards it, taking note of the swarm of teenagers converging on the building. At this point I'm wondering if I missed something. I know website said "Traditional Service" at 9:00 and "Contemporary Service" at 10:30. Maybe that meant adults first, then kids?
The building was bursting at the seems inside. I was handed a sheet that had Winter Whitewash Devotions on one side and some thoughtful text on the other. No program..hm.
Come to find out the Winter Whitewash Devotions had been using the church to house their winter youth retreat. There were at least 200 talking teenagers packed in the church and anything resembling a chair had been set out for the large crowd. I tentatively took an empty seat and settled in.

The sermon began with a live BAND! I have heard a variety of musical acts at church, but this was new to me. A contemporary christian band lead us through several songs. They were great!

There wasn't an official sermon, instead two men put on an act/sermon deal that was humorous and enlightening.

One man decides to make brownies, after adding water to his mix he pulls out a garbage bag. He opens the bag and drops a lump of something into the batter.

The "lump" was actually manure. Amidst the groans of students he loudly declares, "This is certified Angus beef manure from Nebraska. You won't find any better." He later added that some people would probably just think the brownies tasted like hamburger. It was HILARIOUS!

The point of the manure in the brownies? The two men explained that most Christians are like a bowl of brownies, but that we shouldn't become lax and start to think a little sin won't hurt. Any sin is like dropping a cow pie into your bowl. It makes a difference.

Adding a little sin or manure to your bowl doesn't just effect you. The men further explained that just as everyone who ate his brownies would be effected, so will those around you when you sin.

Thought provoking and an easy enough analogy for even me to follow. I like brownies, I don't care for manure. I'll keep trying to keep it out of my bowl. I think I'll give the church another try and see what a "normal" Sunday is like :)

Posted by doublehphoto at 4:40 PM 2 comments:

According to an article in Working Ranch Magazine PETA is targeting youth. They are using methods such music festivals celebrity endorsements. Their "Youth Activist Network" has over 380,000 subscribers. You probably already knew part or all of that.

here's the part I found interesting

There are currently 507,763 FFA members in America.

I hadn't ever though to compare the numbers like that and find them encouraging.

Working Ranch Magazine has several articles, including the one mentioned above, that stress the need for a louder, more unified voice for agriculture. I don't know about you but I find myself primarily surrounded by people who are agriculturalists and we are generally on the same page.

But, at the recent Wyoming Stock Growers/Wyoming Wool Growers Convention I heard the Hadricks speak. They have a concept of including agriculture and the benefits to society ag. has when introducing yourself to someone new. Their classic example is when you're on an elevator and someone asks who you are.

You can check out their blog at Advocates for Agriculture They are from western South Dakota and are wonderful speakers. Their blog also includes a lot of ag-related information.

Have a great weekend!
Posted by doublehphoto at 11:59 AM No comments: 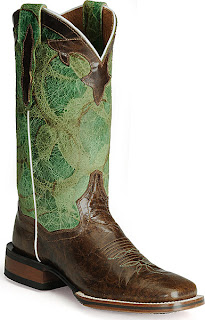 While in NM I worked for Joe's Boot Shop for exactly two days. I learned the difference between ostrich knee and thigh leather, how to stalk people and hover in that annoying way that creeps me out when I'm shopping, and that I have incredibly expensive taste in boots. I also like variety and could easily see myself wearing any number of pairs that I sold.

That being said I still can't choose just one pair. I want a new pair of simple, brown, square-toed boots. I have a fancy black pair and an everyday pair and that's just not enough. I am open to suggestions and at this moment am leaning towards a pair of leather soled Boullet's with dark purple tops. I couldn't find a picture to put on here for anyone reading, but in my search found a couple other choices.

The first pair is at the top of the blog because my patience ran out trying to move it down. They are by Dan Post and I'm not sure about them. They have that funky chunk of rubber in the middle of the sole and I don't like that. I do like the green tops though! 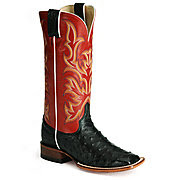 The beautiful Justin AQHA full quill boots are just sweet, but I already have a pair of black alligator boots I wear all the time. I'm lovin the black and red with the double white stitching! Next time perhaps.

Feel free to offer suggestions and ideas!
Posted by doublehphoto at 3:03 PM 2 comments:

I just spent the morning learning about sexed semen and the potential benefits it has for both registered and commercial beef producers. Sexing Technologies has the patent on sexed semen markets it worldwide. It allows users to choose the sex of calves and is 90 percent accurate. The potential to select gender is a relatively new option in commercial beef cattle, but one that could increase profit considerably in certain situations.
Widely used in the dairy world, Sexing Technologies is currently aggressively promoting their product to beef cattle producers. Visit www.sexingtechnologies.com for more information and keep an eye in the Roundup for my article covering the topic.
Posted by doublehphoto at 11:00 AM No comments:

After spending time reading through several ag-related blogs I decided to try my hand at it. What a great way to spread the truth about agriculture and those involved! While I am just getting started, hopefully this will be a means of promoting the wonderful people and practices agriculture encompasses.
Posted by doublehphoto at 2:42 PM No comments: