Way back on Oct. 20, we converged on the WY/MT border for our annual fall gather/wean/work calves/ship home day at the Rocky Point Grazing Association. 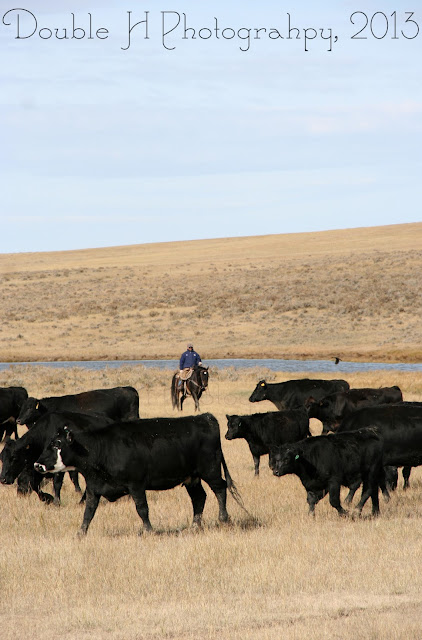 The weather was beautiful, the calves were big, the cows were showing that the grass was gone. It was time to head home for the winter. 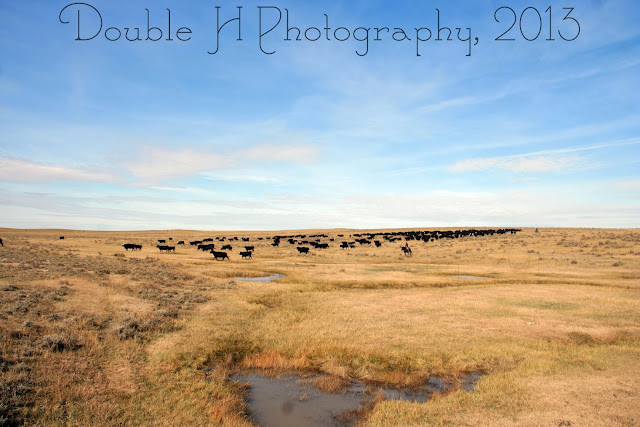 The cows were in agreement. 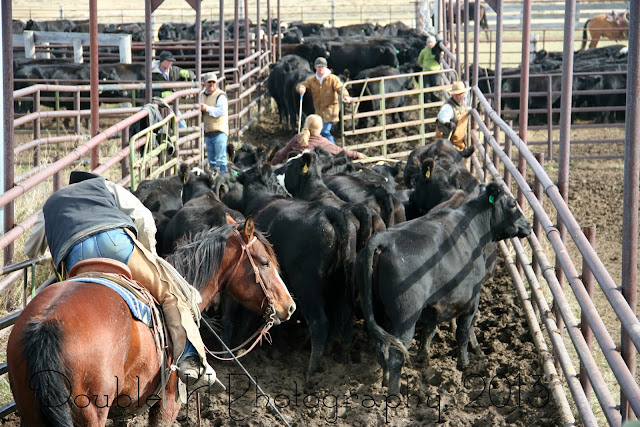 The corrals were muddy for our 4-way sort - my dad's cow, my uncle's cows, my dad's calves, my uncles calves. Momma H snapped this photo of almost the entire crew. 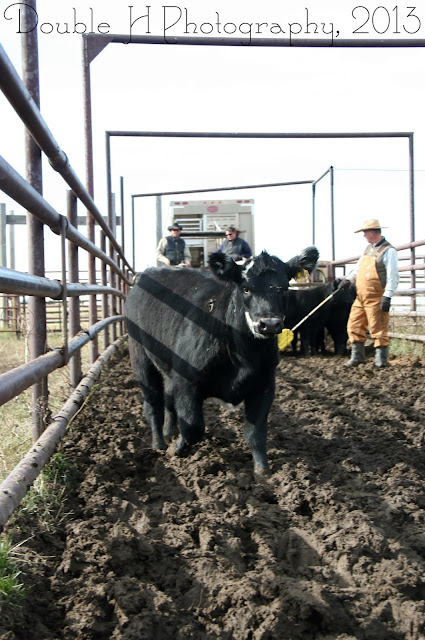 Oh, and my sibling's cattle too, including this heifer of my sister's, which has been a crowd favorite all year. ﻿ 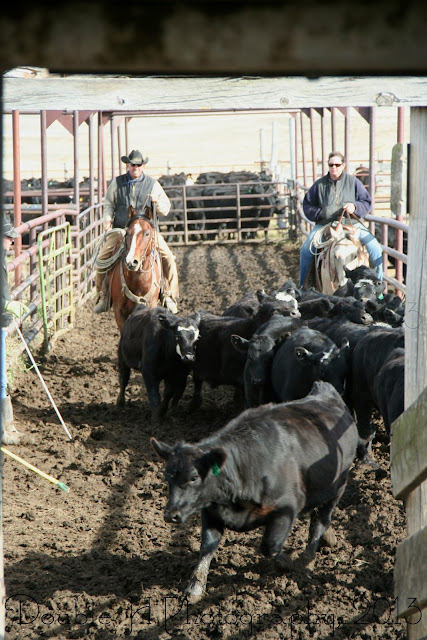 My dad's trucks arrived, and we loaded his calves. 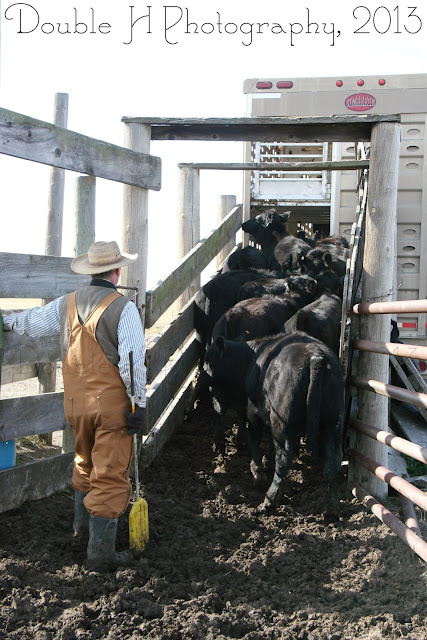 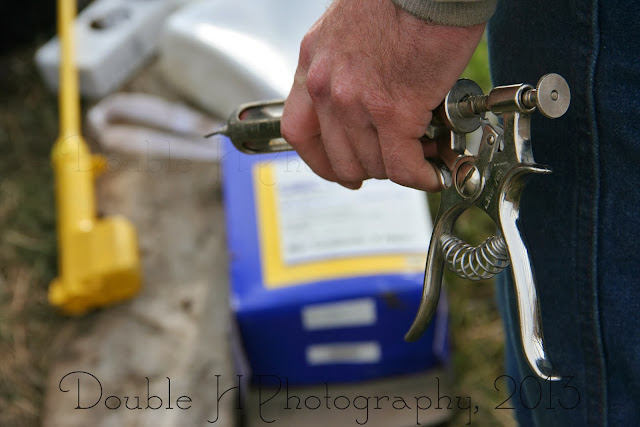 Then we vaccinated my uncle's calves to help keep them healthy as they adjust to life without mama around. They were also poured to keep any bugs from bothering them over the winter months. 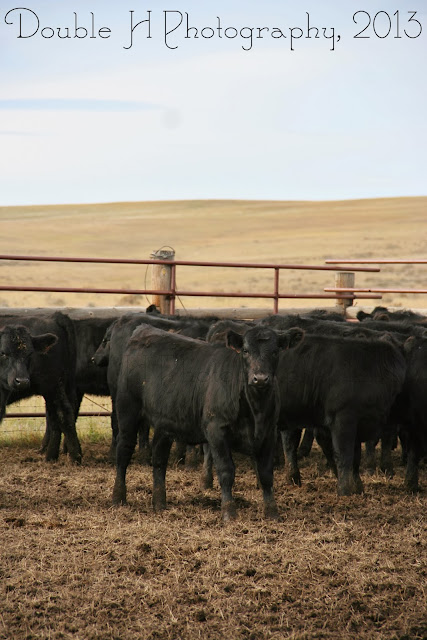 It didn't bother them much. 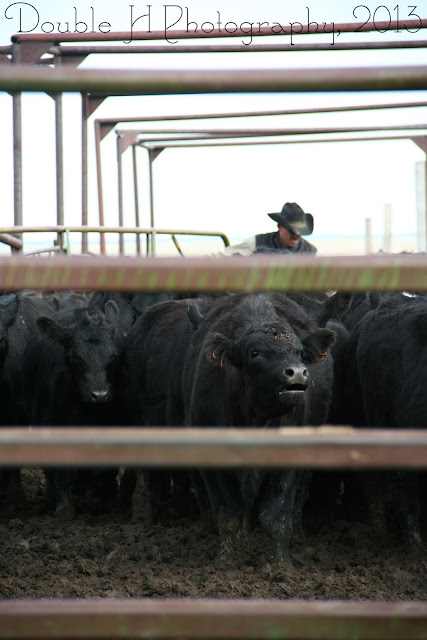 Then, the second round of trucks arrived and we loaded my uncle's calves. 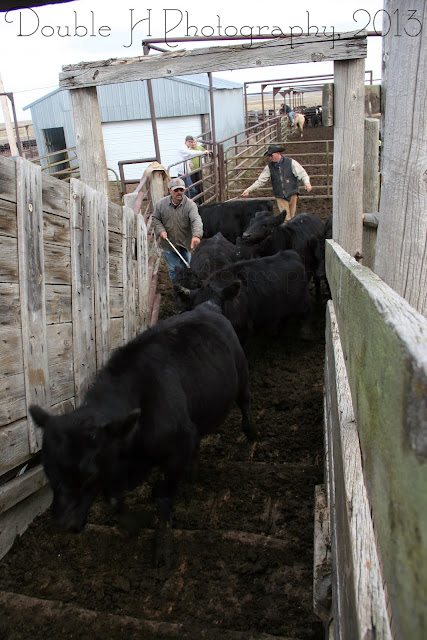 Home they go. The cows are left for 3-4 days to wean, then also hauled home for the winter. 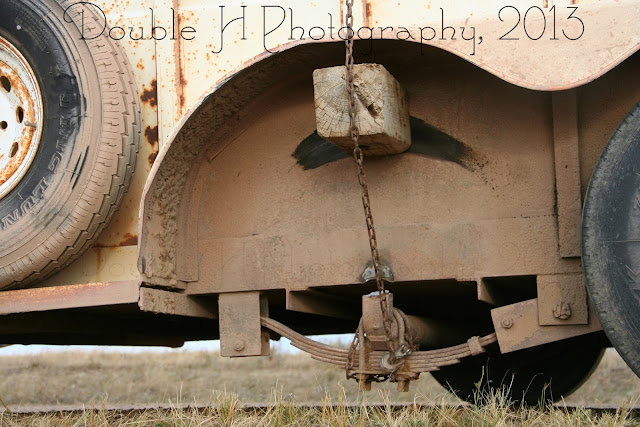 Just when we thought the day was over, excitingly enough the axle broke on our trailer. But, we happened to have a few experts on hand, and another horse trailer we could put our horses in. While we arrived home later than planned, we all made it safe and sound. I am also happy to report my parent's were able to trade this trailer off for a new one - their second new "vehicle" purchase in almost 30 years of marriage. I'm thrilled for them, but never miss a chance to tease them about all the improvements that happen after the kids leave.
Posted by doublehphoto at 7:48 AM 5 comments:

One month ago tomorrow is the day the Atlas blizzard began. While many have moved beyond it, those in my community continue to deal with it daily. It has been a bittersweet mix of highs and lows, and there is much to share with all of you.
First is my refreshed faith in humanity. I cannot believe the human kindness, outreach, concern, help and fortitude shown by people I know and have never met. Just today I am finishing an article for Tri-State Livestock News detailing the group Heifers for South Dakota's first donation of 20 head of bred cattle and 3 replacement-quality heifer calves to a young family who suffered a tremendous loss following the storm. This donation will likely be the tipping point that allows them to stay in the ranching business, and to hear the stories of all involved would warm anyone's heart.
There are also the ladies of my hometown, who are working to make Christmas baskets and get people to "adopt" impacted families to help them have a wonderful holiday season. They are meeting tonight to work out details and have been asking me daily for information to help them.
The random people who have emailed asking if I know a young person who lost a horse and would like a 4-H project, or who know of church groups looking to help or donate funds are another outstanding example of the true caliber of people and presence of God in rural America today.
I would also like to share that when the cards all fell, we were extremely blessed to not lose a single calf. Not only that, but they tipped the scales at 622 on sale day and brought an astounding price, knocking our recovery period down from a decade to (hopefully) closer to about five years.
However, the weight of those lost is still heavy on hearts. Everyone deals with such losses differently, and I seem to struggle daily with the loss of my husband and I's cattle, and especially my two cows.
One was the last calf of my first 4-H heifer, Sassy. I bought that 4-H heifer at 8-years-old from the family ranch, and my cow that died had over 100 years of Hamilton breeding behind her. Then there is the fact that her only daughter, and the last cow in that string of cattle, looks to be open. While I pray looks are deceiving in this case, I am also struggling to prepare myself to deal with what may be the end of the line of cows that started me in the business. I never imagined I would not have a cow that went back to Sassy, and now in the space of four months it appears that is not only a possibility, but likely a soon-to-be reality.
Trying to get caught up has been another constant struggle. Major weather events take time to recover from. There are still tree limbs to remove from fences, deceased cattle in one of our pastures too muddy to travel in, a lot of fence to fix, meetings to attend regarding the blizzard, paperwork and phone calls to make, all mixed in with the usual fall workload. While we're making headway, there is still so much to do that it can be overwhelming at times.
But, day after tomorrow marks my husband and I's four month anniversary. Yes, you count and celebrate months when your marriage starts out like ours has. And, while if we had it all to do over again we might have left my cows in Wyoming for the summer, other than that we are both so grateful to be married and have each other as we go through all these challenges.


Posted by doublehphoto at 1:57 PM No comments: