When calving heifers, you inevitably have to help one now and then. This year we are pulling a few more calves than usual, which is a bull related issue. We aren't the sort to wait around several hours for a heifer to have a calf, which some people do. If she isn't progressing in a timely fashion, we like to get her in and get the calf pulled before the heifer is worn out from trying to have her baby, and the calf is exhausted from being squeezed. It's a system that works well for us.
Below is one such example, and I must admit that as far as getting excited about pulling a calf, this is as close as I've ever been. Getting to pull one in the daylight, with lots of help present so I could take photos, isn't the usual story of how it goes.
Just to let you know, I'm going to show you everything. If you don't want to see everything involved in pulling a calf, now is the time to leave. 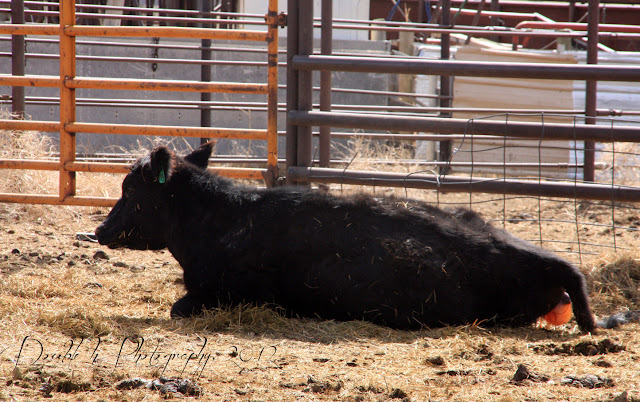 This is typically what it looks like when a heifer is calving in general, and often the stage she ends up at when she needs help, although the sac is often broke, and you can see one or two feet sticking out. One reason heifers sometimes have difficulties is because the calf is backwards, or in another awkward position. Just like in humans, most come the "right" way (feet and head first), but not every one. One of the first things you note when observing a heifer calving is how many feet are out, and if they are pointed up or down. You want to see two feet, toes pointed down, because that means the calf is coming the right way.
Another reason we might need to pull a calf is because the heifer is a little lazy, and just won't work at it hard enough. Or, sometimes the calve's head, shoulders, hips, or all three, are too big to pass through the birthing canal with ease, and assistance is required to help get the calf maneuvered and pulled out of the birthing canal. With modern advances in breeding, size related issues aren't as prevalent as in decades past, but it does still happen.
If you don't pull calves in these instances, the chance of death greatly increases for the calf, as does the chance of physical injury or health related problems for the cow. In some cases, the cow will also die. Best case scenario for a heifer that experiences calving difficulties, or dystocia, and doesn't receive assistance is a longer interval following calving for both mom and calf to return to optimum health. But, usually the turnout is much less optimistic than that.
We watch our heifers 24-7, and there is always one member of our family on-hand during calving to provide any assistance needed by these first-time mothers. 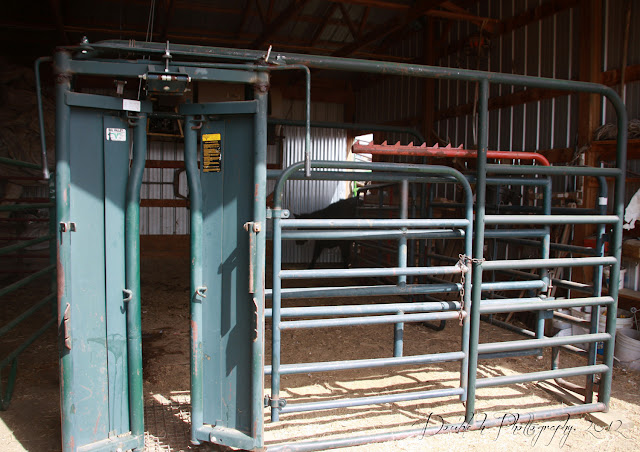 Upon deciding to pull a calf, we move the heifer into our calving shed, and pen, making every effort to keep her calm. This little pen at the front of the photo is our calving pen, and consists of an automatic head catch, which you can see on the left, and is designed so one person can do the entire job alone, and efficiently. We like our calving pen! 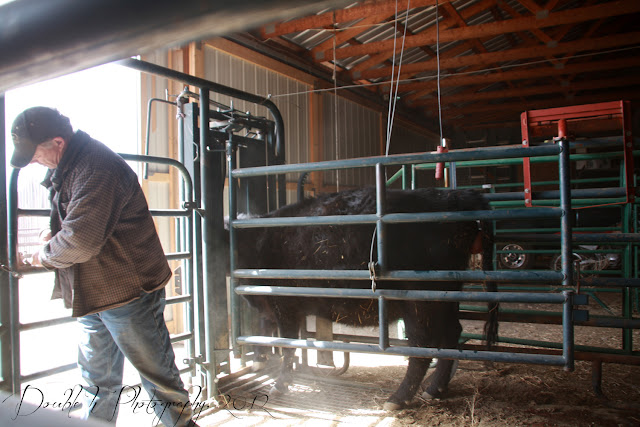 Using the swinging wing, you maneuver the heifer until she sticks her head into the head catch. The wing has that red arm at the top that catches in a specially designed contraption and holds it in place. That guy is my dad, who has been pulling calves for decades. She is in fine hands with his help. 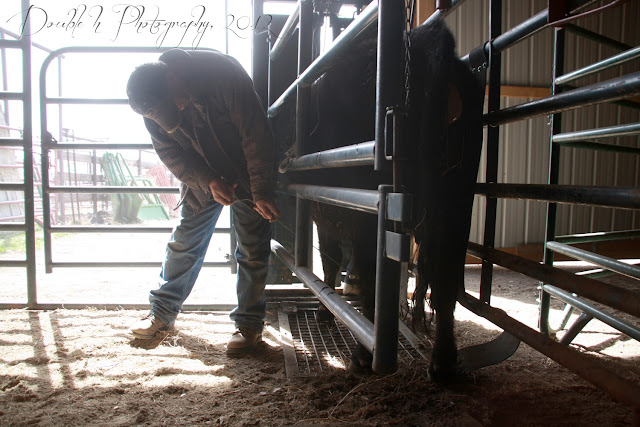 This is where our system varies from most I've seen. Dad grabs that rubber strap, and pulls it under the heifer. 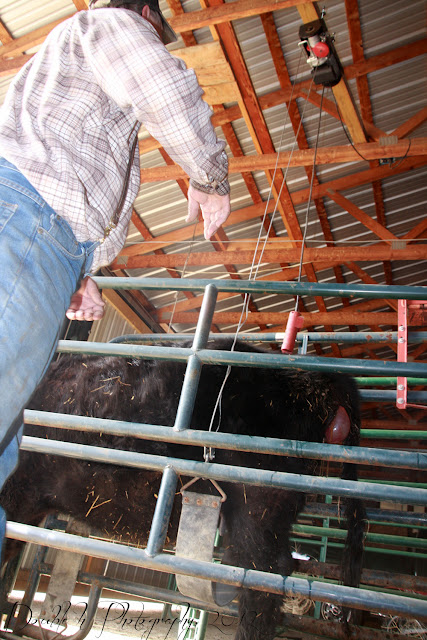 Then he hooks it to a cable, which is connected to a wench. My dad and brother are mechanical gurus, and they incorporated this component. 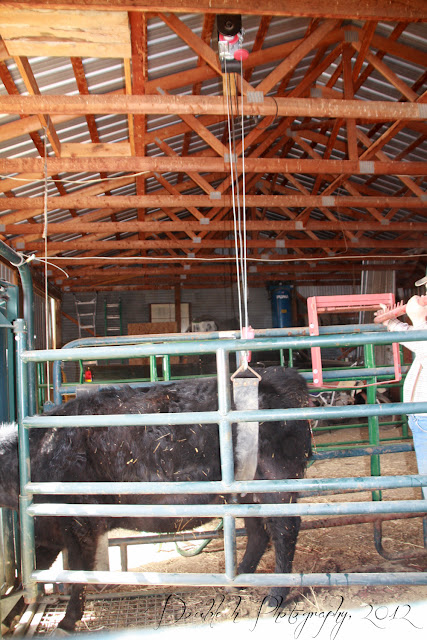 Then he uses a control (the read handle) to pull the rubber strap up, until it is snug under the heifer's flank. This is used to keep the heifer on her feet while pulling the calf, and keeps her back straight, which reduces the chance of her being injured. It also prevents the chance of her sitting down halfway through pulling her calf. 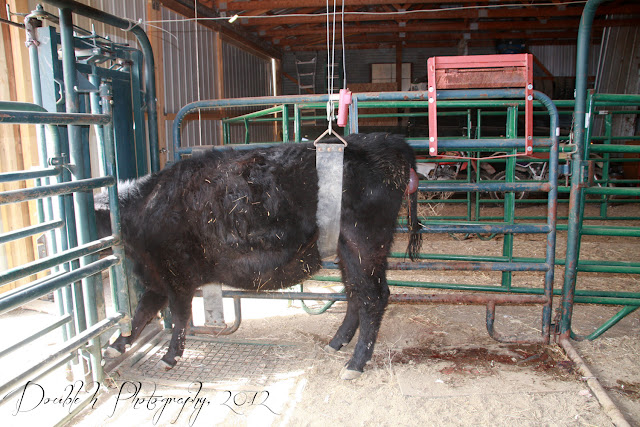 Now the mother is ready. Her back is supported, but her feet are still on the ground. The wing is pulled back out of the way at this point. 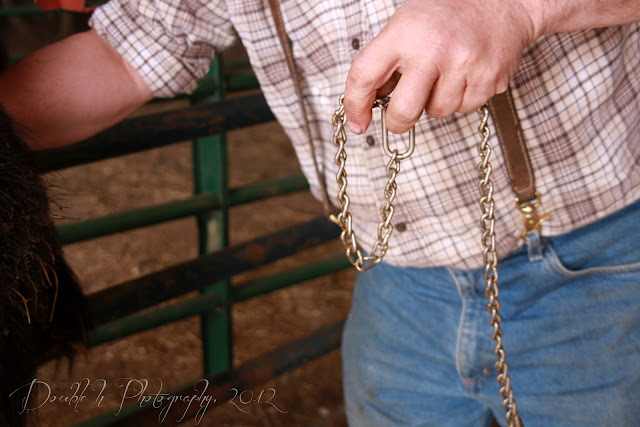 Then he gets his sterilized OB chains, makes a loop with one end, and holds it in one hand. With the other hand he reaches into the heifer, and locates one front foot. He also feels for the head, to make sure it isn't turned back. 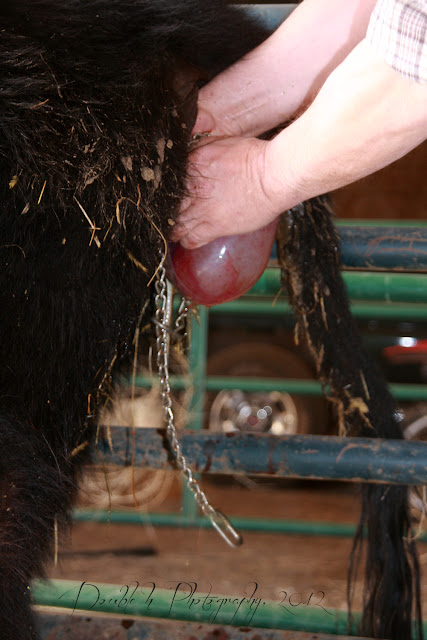 He positions the loop above the hock (ankle, or like a dewclaw on a dog), and pulls it snug. If you don't get the loop above the hock, you can pull the hoof off the calf while pulling it. Newborn calves hooves are very soft, and not hard like mature cattle hooves. It's very important to get it positioned correctly 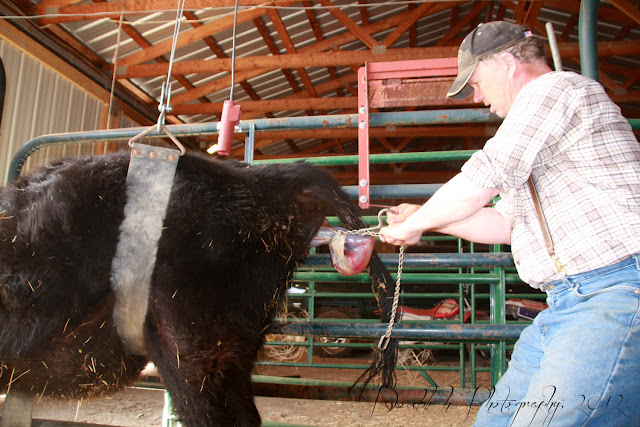 He grabs his handy little hook, and gently tugs/pulls on the calf until the other hoof shows up. 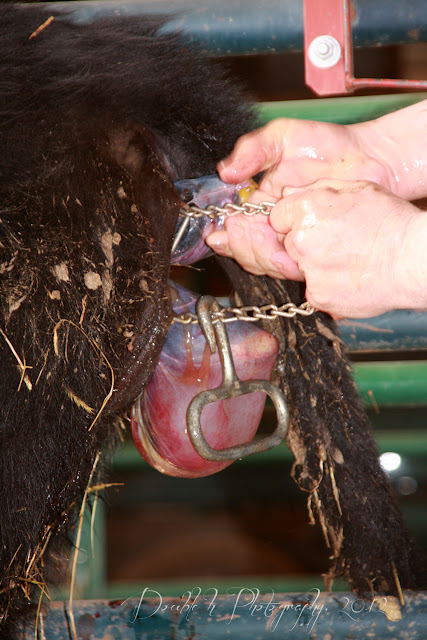 He makes a loop with the other end of the OB chain, and positions it on the other hoof. Like so. 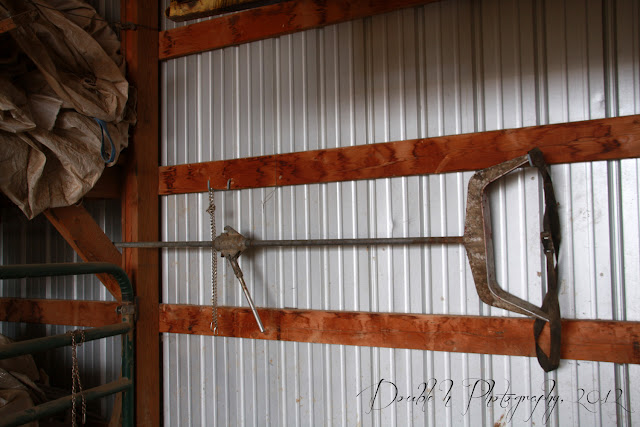 Then this tool comes into play, which is called a calf puller. 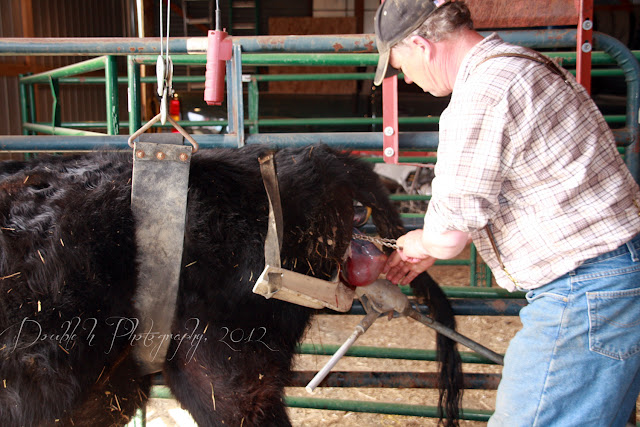 You position the calf puller like this, and rest the other end on the ground. 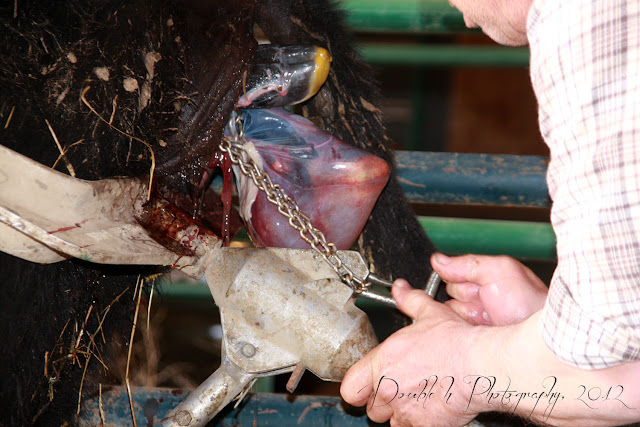 He pulls the chain, and hooks it onto the calf puller, like this. 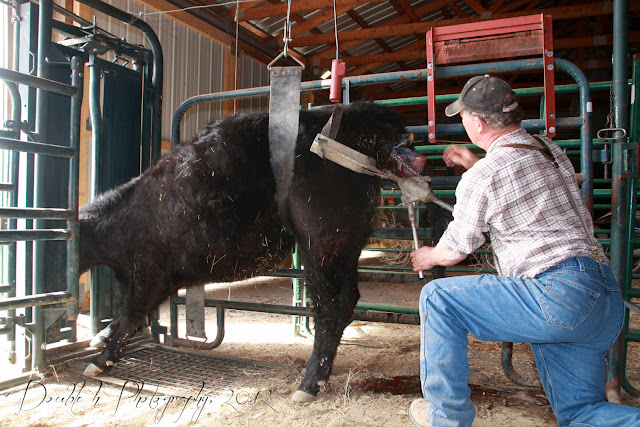 Then he pushes down on the handle, keeping it angled down like you see above, and starts very slowly pulling and releasing the handle. You don't just crank on the handle and pull the calf out as fast as you can. 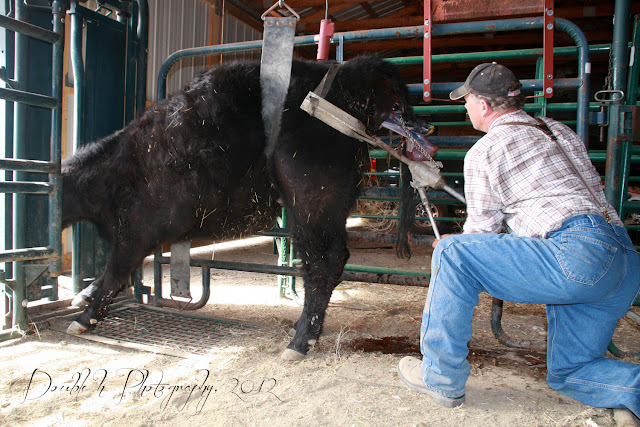 When the heifer pushes, then you crank. When she stops pushing, you stop cranking. 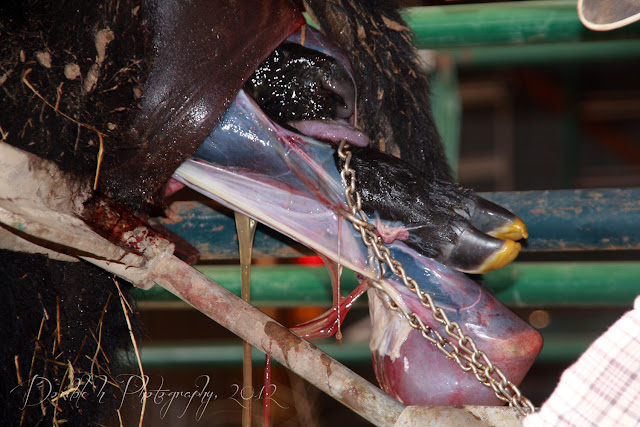 When the nose becomes visible, we make sure the sac isn't covering it. If the calf is really big, you have to be careful as you work the calf past the heifer's pelvic bones. If a calf is really big, or a heifer's hips are really small, they can get hip locked, which is when the heifer's hips get stuck on the calve's hips as he tries to pass through the opening. This is a bad situation, and often the heifer and calf get hurt. We haven't dealt with that issue on our place for a long time because of genetic selection, and while this guy was husky, she was plenty big enough to have him with our help. 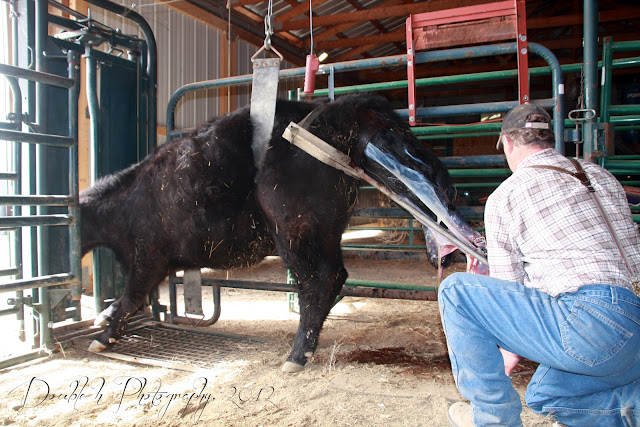 He continues working with the heifer, cranking when she pushed and stopping when she rested, easing the calf out. Sometimes, once you get the head and shoulders out, the whole calf just comes out. Sometimes you have to continue to work the entire time. Each time we pull a calf it's a little bit different. 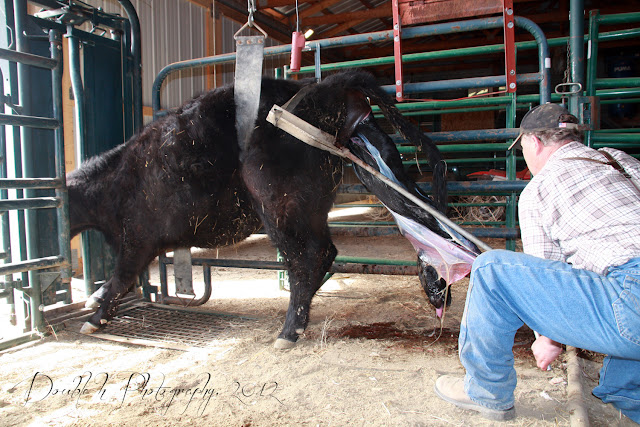 Dad had to continue helping all the way with this guy, but he wasn't overly hard to pull. He was big, but shaped right in that he was a long, smooth calf, not a wide, overly stout one. 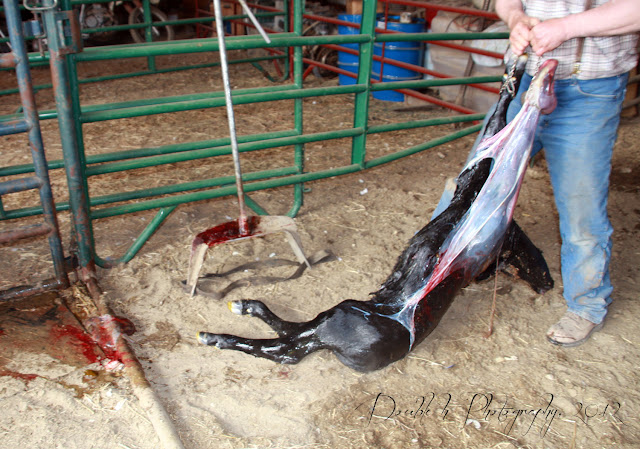 Once the calf comes out, he immediately unhooks the chains from the calf pullers, sets the pullers aside, and pulls the calf to opposite side of the pen. He does this because when the cow is released, she has to back up, and we don't want her to accidentally step on her calf and hurt it. So, we get it out of the way. Sometimes the new mothers are a little excited too, which is another reason to get the calf out of her way. 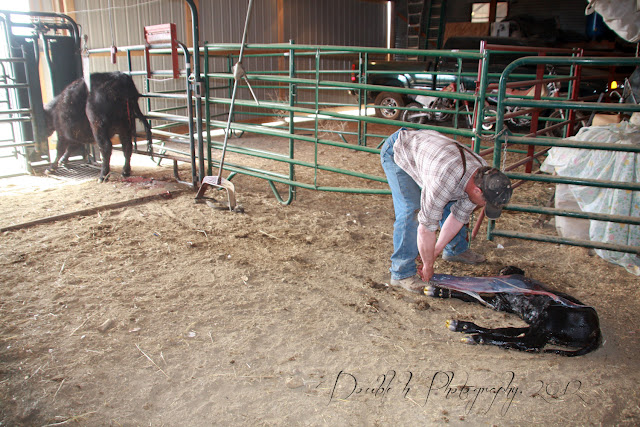 He lays the calf on its side and removes the chains. 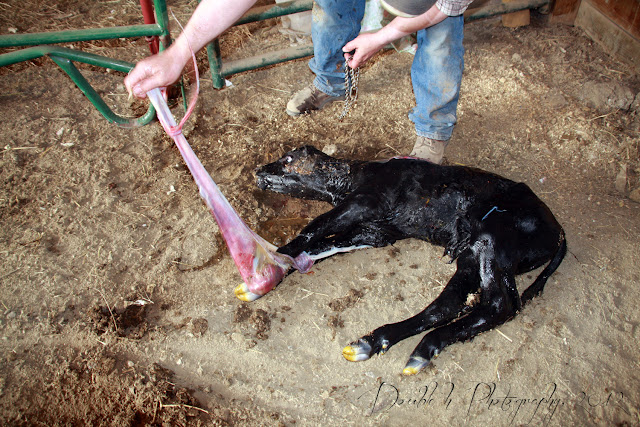 This is what a very brand new calf looks like. Dad gets the rest of the afterbirth off of him. 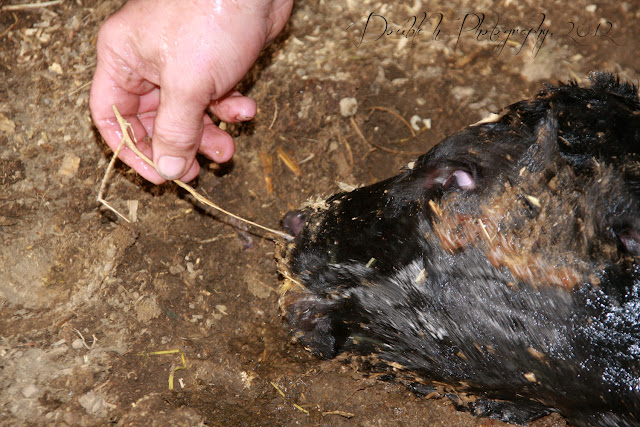 Then he grabs a piece of straw and tickles the calf's nose with it. This causes the calf to sneeze, start breathing, and clears the nasal passages and lungs. It also usually gets them to sit up and realize they are no longer inside mamma. 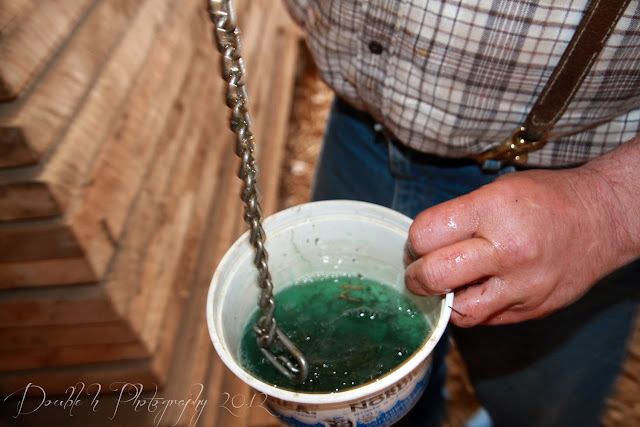 When the calf is alert, the OB chains are rinsed thoroughly in a specially designed livestock disinfectant, and hung up for the next patient. 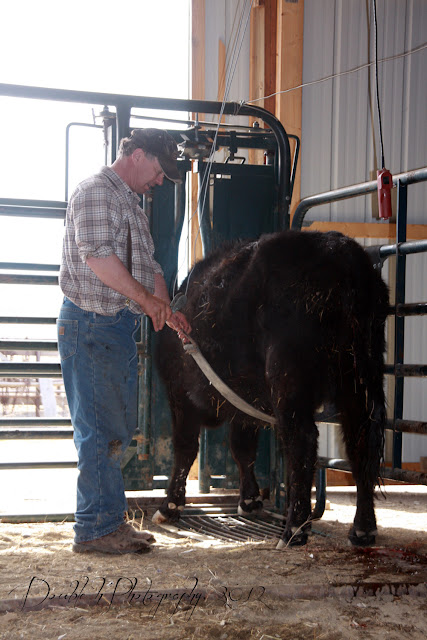 He returns to the heifer, lowers the cable, and unhooks the rubber strap. 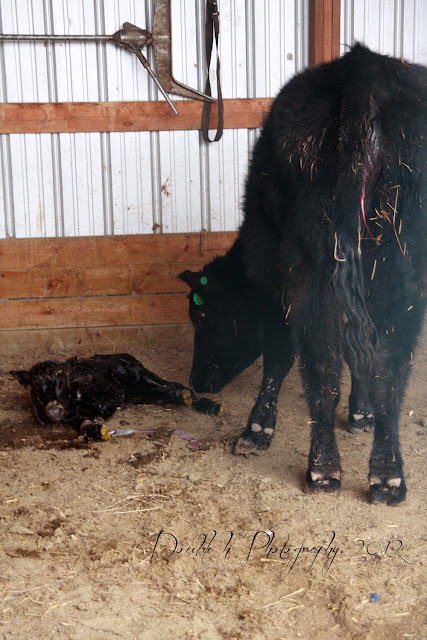 Then releases the heifer. The moment she shows interest in the calf, we leave them alone for a while so they can bond. Causing distraction at this moment can cause big problems in the bonding process. She will lick him off, and he will be up and sucking in under an hour. 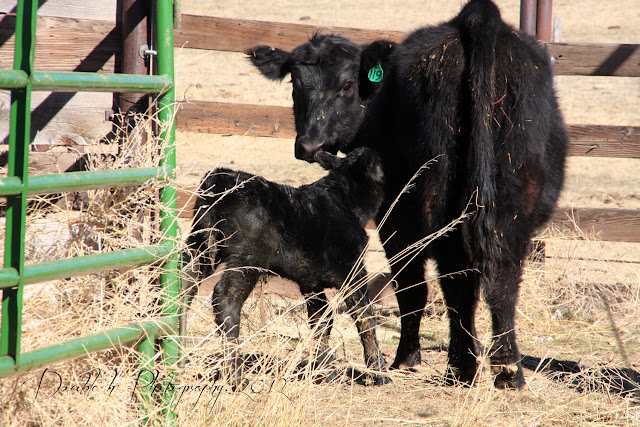 Here she is with him about three hours after he was born, up and at em, just the way we like it.
Posted by doublehphoto at 8:07 PM