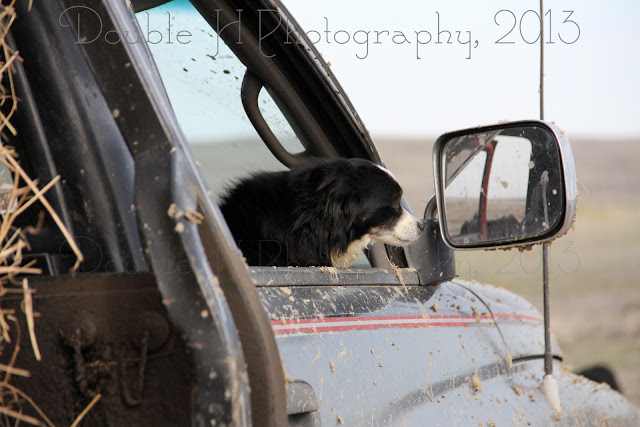 Man did the spring rush hit in South Dakota while I was there. This resulted in an extended stay to help with three brandings, AIing heifers, getting the drill ready and planting barley, putting CIDR's in cows, hauling heifers to pasture, planting around 1,500 trees, planting half a yard, saving a pig from death, a wedding dress fitting, cake testing, and an eight-hour round trip to Sheridan for an Ag Books for Kids presentation. Whew!
While it was fun, exhausting and a good experience for my fiancee and I, a dampener was put on the trip when my parent's called to tell me my two little dogs, Miss Weenie and Emmie Lou, had been missing for three days. When you live way out in the country, dogs missing for two days might still be out and about, but three days is kind of the turning point. Now, five days later they still haven't returned home, and reality is setting in that they most likely won't. Coyotes, a tunnel falling in on them, a badger, a stranger on the road? Who knows, but they are gone, most likely for good.
While both will be missed terribly, there are dogs and then there are special dogs that you get in a lifetime. While Miss Weenie was a good dog, Emmie was one of those special few.
I got her in Cheyenne six years ago this month, and she was the cutest puppy you ever saw. She threw up in my pickup six times on the drive home, and that was just the beginning of what would be a lifetime of sensitive stomach issues. She also made frequent trips to the vet, and had to be put under anesthesia three times, never for spaying, and also threw up after coming out of anesthesia each time. Then there was the time she ate mouse poison, and I had to give her hydrogen peroxide in a syringe until she threw up...
Stomach issues aside, she was a sweetie, and made it through four moves with me, from college to across the county and back to Wyoming. From city to country to city and finally back to country again, she was there for all the major and minor life events in the past six years. We racked up over 100,000 miles of windshield time together, and she could handle a 14 hour drive like a pro.
She aimed to please, loved kids when she was younger, chased balls and sheep, and would sometimes sleep flat on her back, all fours in the air, snoring. She was an attention hog, food lover and incapable of sitting still 90 percent of the time.
Since returning here, her life centered around feeding with me every day in the winter, riding the 4-wheeler whenever allowed, eating gross things, holding down the pickup cab whenever we were doing cattle work, keeping the cats in line, getting ear mites regularly, somehow knowing and silently appearing at the dinner table every night when my dad was finished with his meal so she could follow him to the porch for her morsel, sneaking a chance to sleep on the couch, begging out belly rubs, and all sorts of other little dog activities.
Now, as I plan another major move in a couple months, the thought of her not continuing the role of cherished constant companion is a very sad one.
Posted by doublehphoto at 3:58 PM