The Atlas Blizzard in photos

A week ago we were dealing with the images below firsthand. Tuesday was the day of riding, searching, counting the living and tallying the dead. It was awful. One week later we are doing better. The initial emotional shock is wearing off, my husband and I are both holding colds fairly at bay and everyone is making headway toward recovering from this disaster, with full knowledge that we still have a long road ahead of us.
﻿ 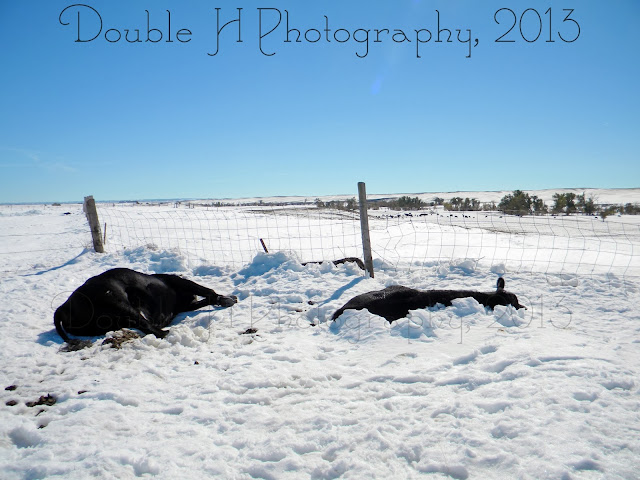 One of my husband's cows that didn't make it as well as a couple calves belonging to a neighbor. Beyond them are some of the cattle that survived the storm. 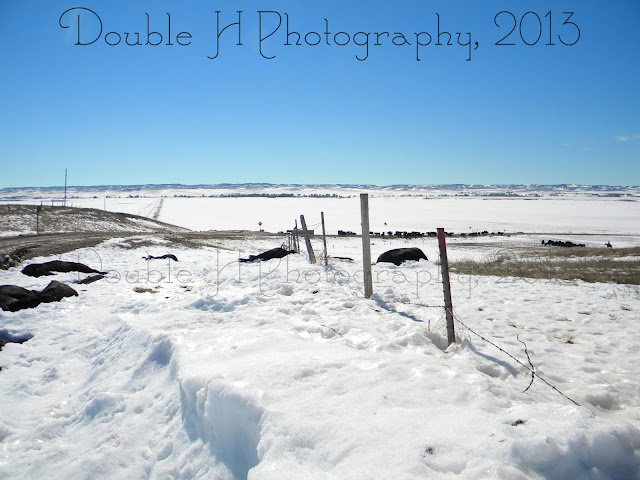 The scene on the fence line to the pasture our cattle were in prior to the storm. The majority of these animals are not ours, and our living cattle can be seen trailing up the road and back to their pasture. There is one of my cows in this area though, dead because she would not crawl through the fence with the rest of our herd. 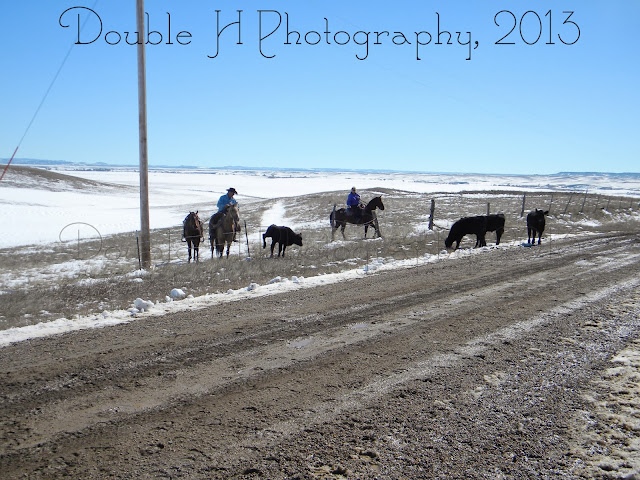 Everyone helped everyone, and shown are some of our neighbor's calves, which we put with our cattle and fed this week. The poor guy crawling through the fence was not all there mentally after his experience in the storm. 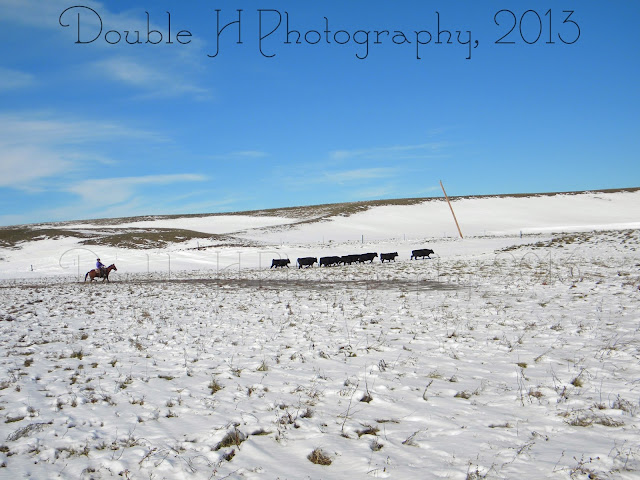 My sister-in-law and I rode in search of our yearling heifers, counting and trailing everyone we found back home. These got out when a power line pole fell on the fence and they drifted over it. As you can see the ground didn't freeze and dealing with the deep mud was a big problem in getting around to check on animals, as was the deep snow on top of the mud. 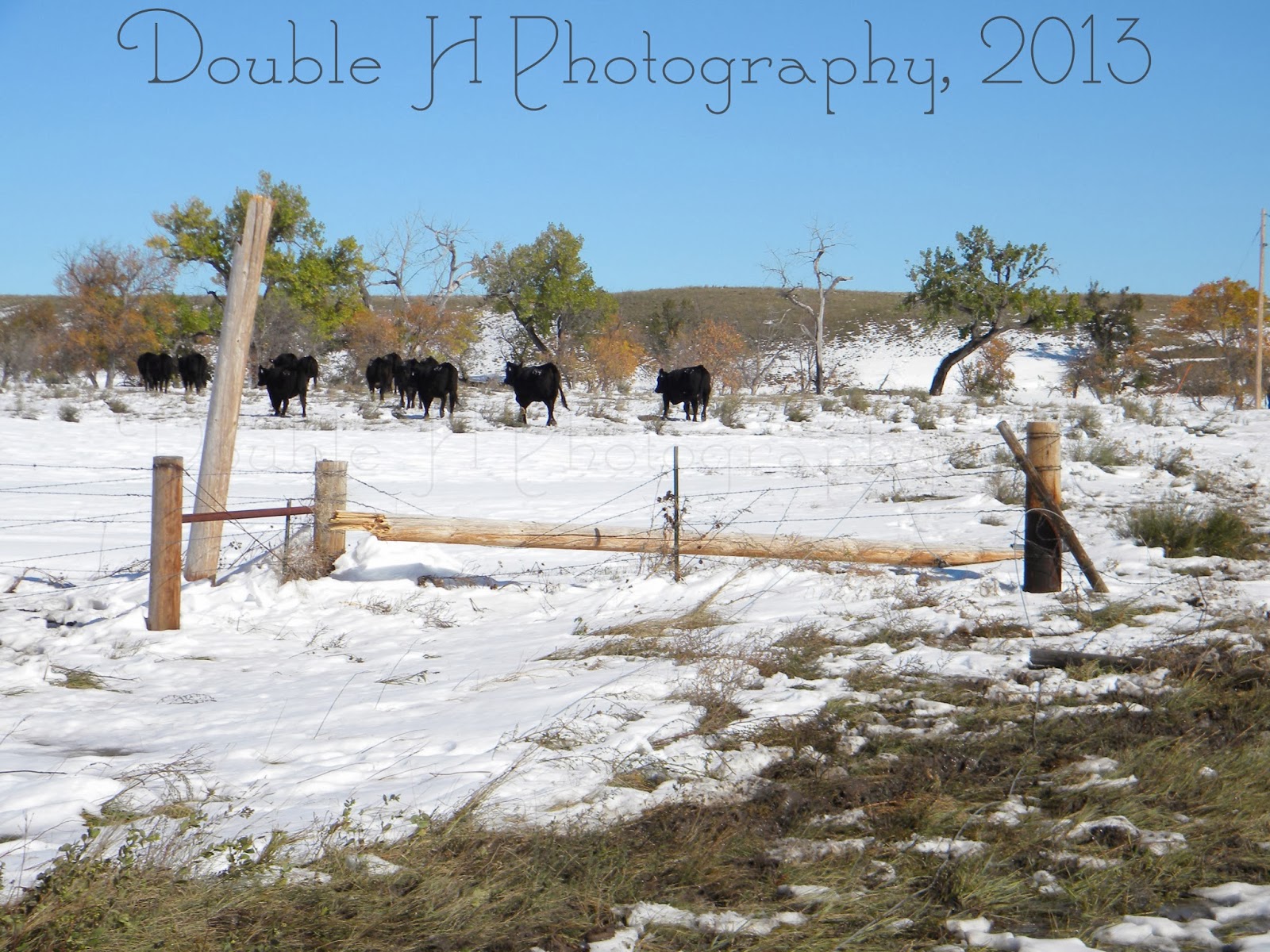 The guilty power line pole. If not for it, we may not have lost any yearlings. Or, what we did lose may have been in a pile on this fence along with all you see alive in this picture. 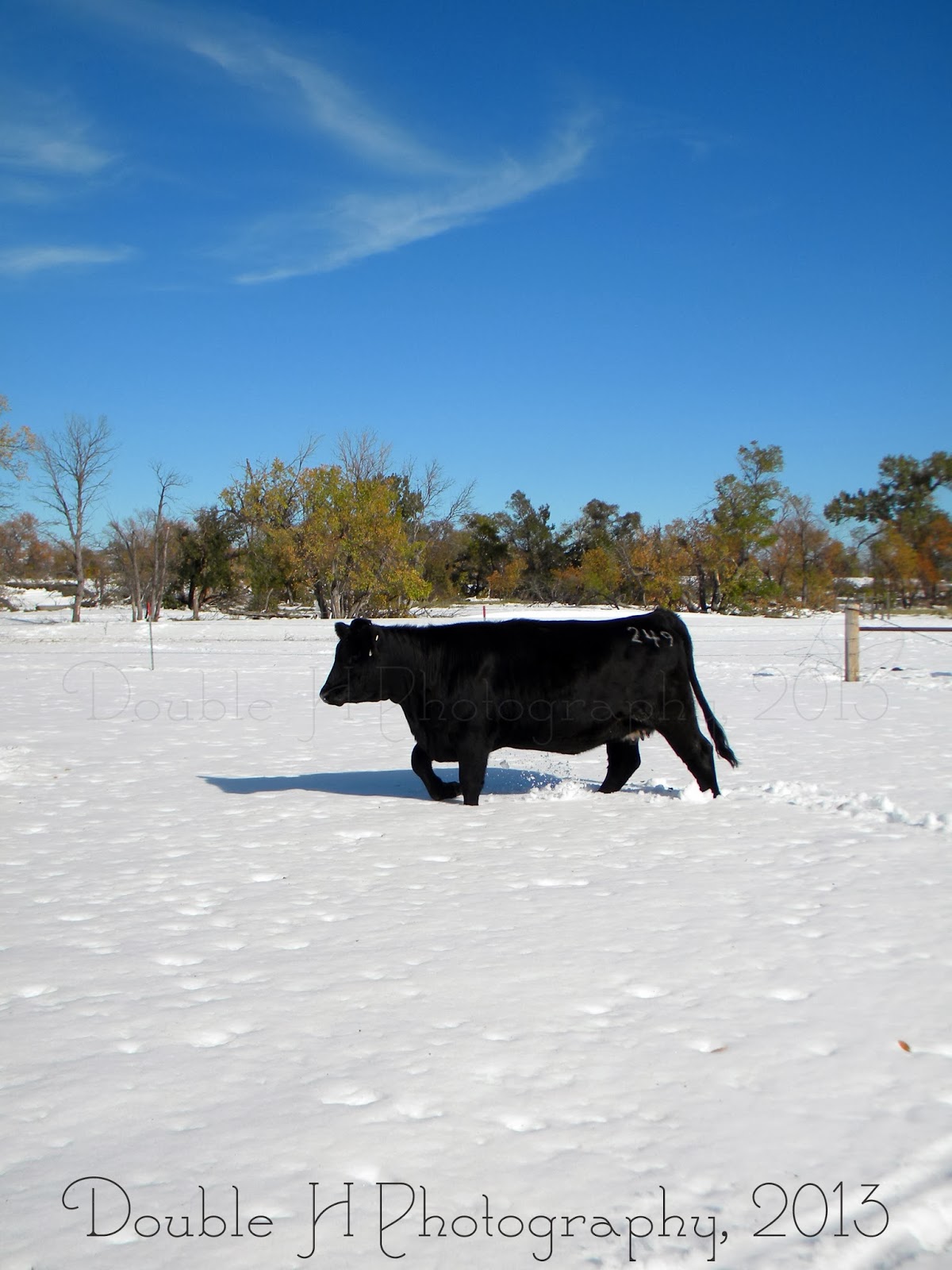 This heifer was alone, stuck in the corner of a pasture by a winding creek filled with snow. Every time we drove her out to this corner, she headed back into the trees to stand in the same spot on the creek bank. 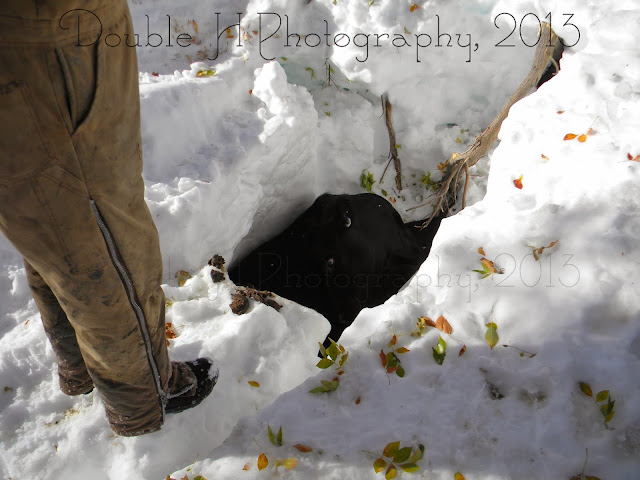 When my sister-in-law finally got off her horse to walk the heifer out, she found the reason behind her returning to the same location. All her buddies, and our missing count, were in the bottom of the creek.
This is a heifer we found buried in snow, but still alive! She is basically sitting on her butt, to give you an idea of how deep the snow was in this location. 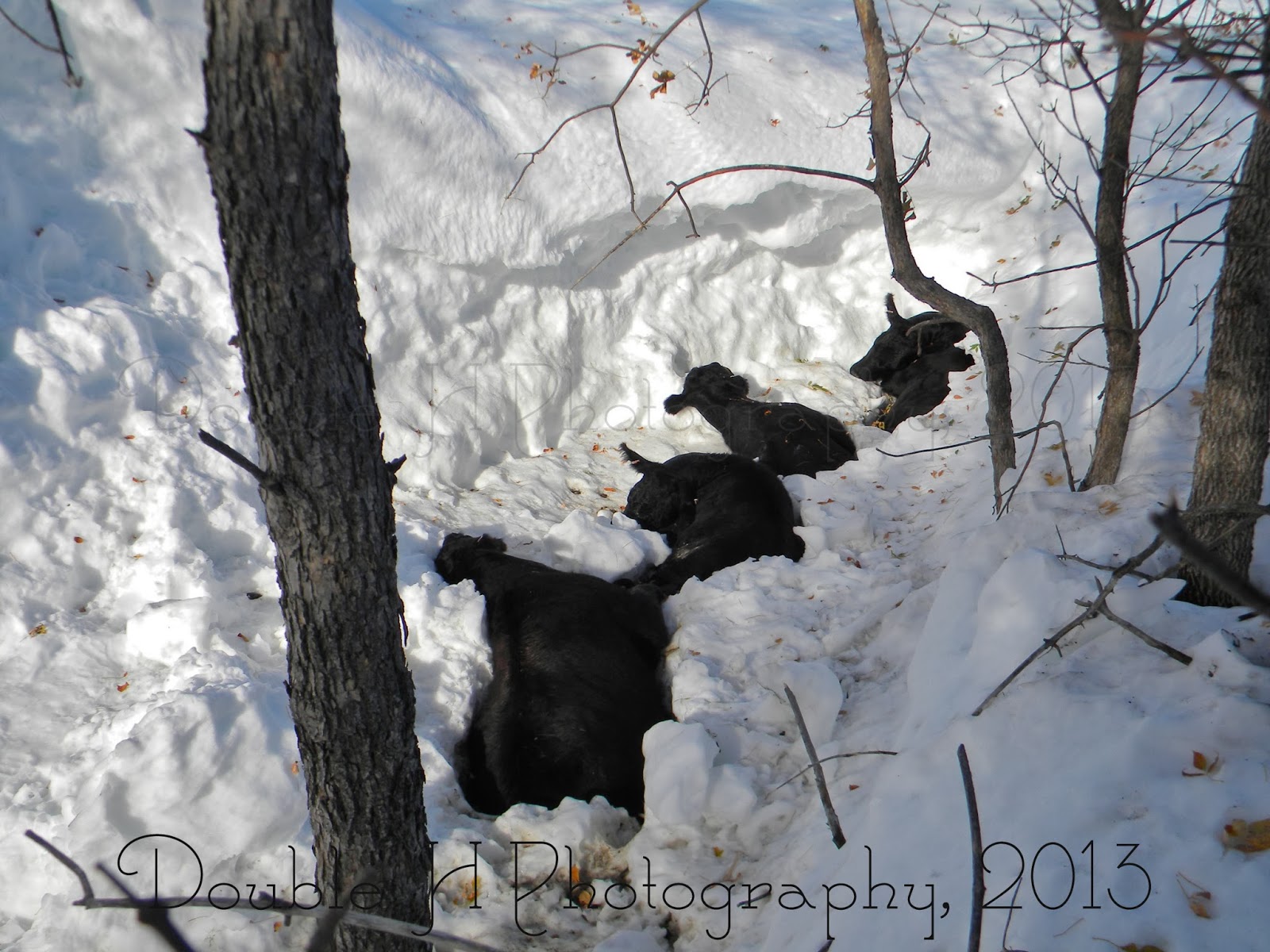 These were not as fortunate. 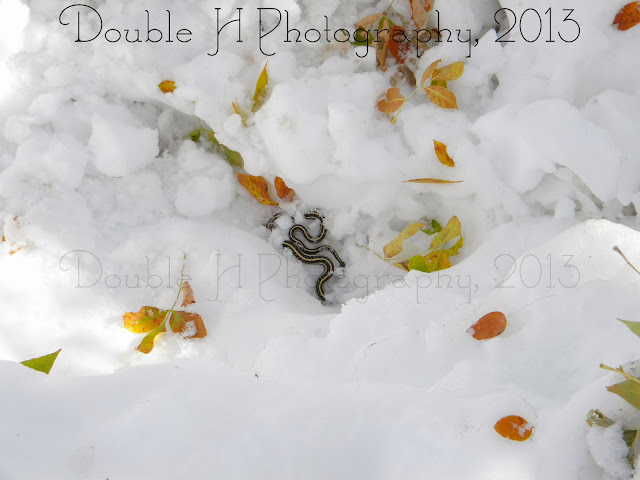 The gardener snake we also found partially buried, but alive. 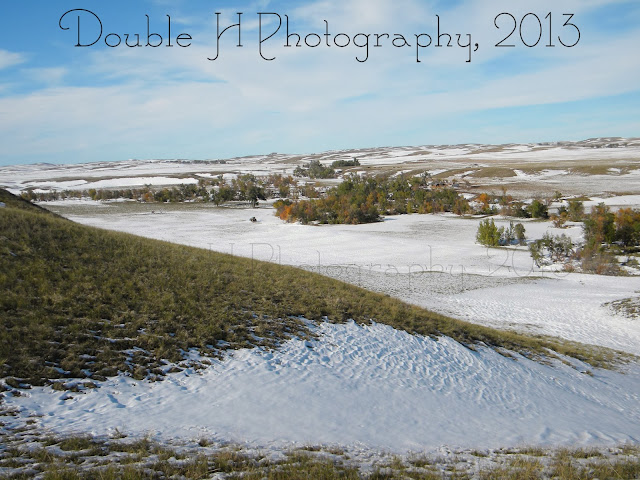 My father-in-law headed to the trees and creek where the buried alive heifer was located to help pull her out. Then she was carried in the tractor bucket to higher, dryer ground and propped up against a hay bale. 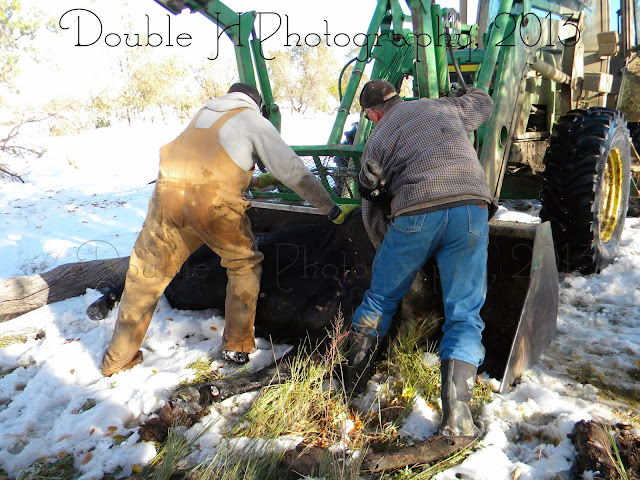 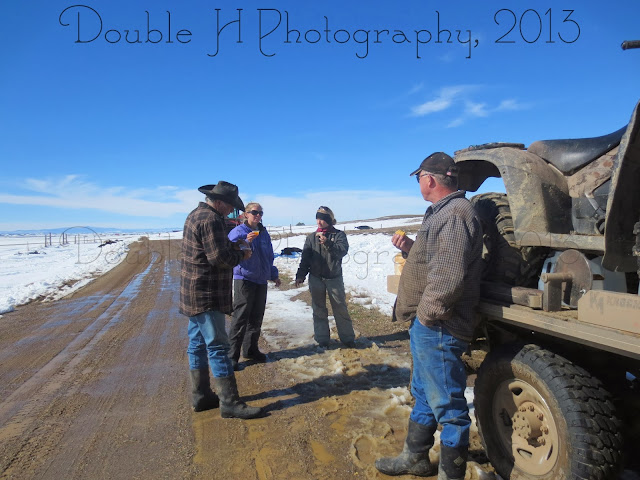 My parents brought their feed pickup. loaded with food, water, a generator and a 4-wheeler, and helped us for two days. We are so blessed to have such amazing parents and families! 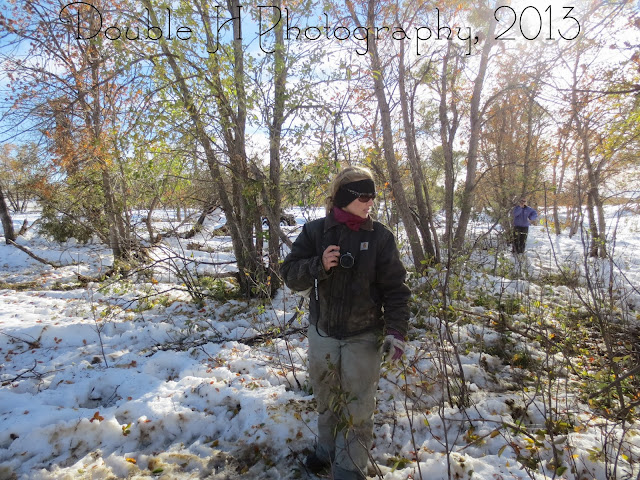 Me, taking pictures for insurance and work purposes. This is next to the creek where our missing yearling heifers were found, including the one still alive. 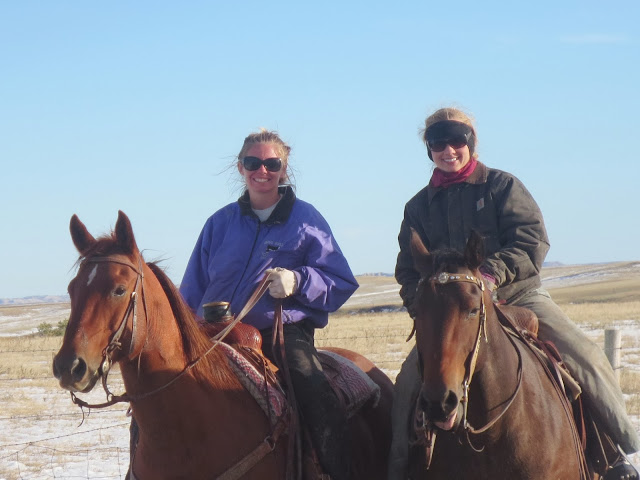 At the end of the day, we were all worn out, including my sister-in-law and I, but it helped knowing for ourselves where we stood, what shape the livestock were in, and being able to move beyond the worry and concern of not knowing.
For those interested in learning more about the blizzard, who have questions regarding why we lost so many cattle, or who want to contribute toward helping those impacted, here are some additional links.
http://prettywork.wordpress.com/2013/10/11/questioning-cattle-deaths-in-south-dakota/
http://dairycarrie.com/2013/10/13/southdakotaatlas/
http://igrow.org/livestock/beef/understanding-what-happened/
https://www.facebook.com/RanchersRelief

Posted by doublehphoto at 9:39 AM