Kerstin asked another question a few weeks ago:
Here's another consumer question: How does the water 'system' (the one with the tire) work? Is there a trick to keep it ice in the winter and alga/bacteria free in the summer? How do you fill it? Thank you! K.
Thank you for the question Kerstin! I didn't have the pictures I needed when you asked, but I got them all snapped, and here we go.
Our water system is all based on about 30 miles of underground, PVC pipeline, that transports water from multiple water wells to more than 20 water tanks, most of which are recycled tractor tires, like the one below. We also use a couple windmills to pump water, and have a solar well on our place that we pump water with also. The system is kind of like a town's water system, where water is piped to various residents (water tanks) from a large well (several wells in our case).
We put in all the pipeline and tanks ourselves, do the maintenance on them, and specifically designed our water system so that every pasture has water that comes from at least two sources. That way if one well/water tank/ pipeline/etc.. breaks, our livestock will still have water from a different source. 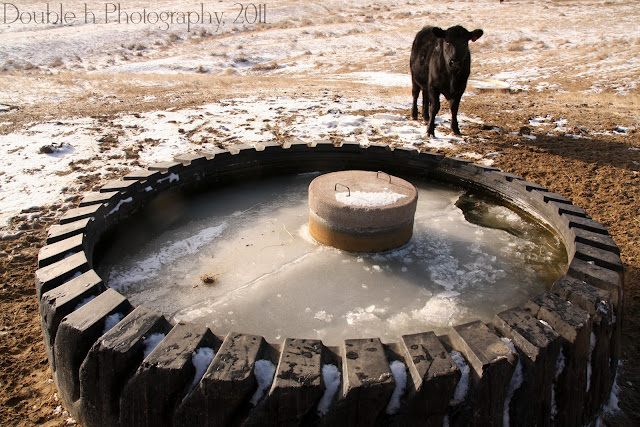 Each tank has a center cement ring, seen here. Some of them are covered, and some are uncovered. All the "guts" of the tank are located in this ring. Having a ring around the guts keeps the cows from breaking everything when they crawl into the tank (yes, they do this), and reduces the risk of the guts freezing even more. 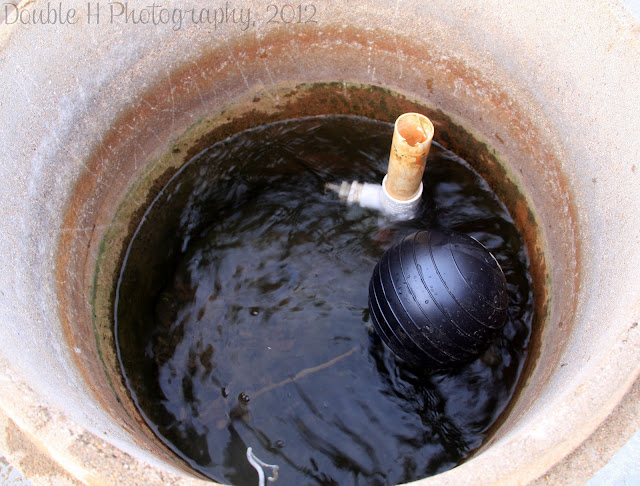 Here are the guts. Our water tanks work exactly like the tank on your toilet. The water is piped up into the tank from the pipeline, windmill, or solar well, and the big black ball is a float that controls a valve on the water pipe. The float floats on the water, and when the tank is full it turns the water pipe valve off. As cows drink, the water level drops. This is like when you flush the toilet. The float drops with the water level, and opens the valve it controls more and more as it drops, which refills the tank. There are holes in the bottom of the cement ring that feeds the water into the entire tank.
We set each float to shut the valve off at a certain level, and that's what keeps the tank from spilling over the sides. This is done in a very high tech fashion: we bend the metal stem the float attaches to the valve with until it stops at the right spot : )
That white PVC pipe is what we call an overflow. This is a key part in reducing the amount of ice, and freezing, that occurs on a tank. The little part that is sticking out to the left is a nipple, with a hole in the end. That allows water to constantly flow out of the tank in a small volume, which also keeps water flowing in very slowly.
This is based on the science that atoms in motion are warmer than atoms not in motion. The continual movement of water within the tank created by the continuous flow in, and out, keeps it from freezing, or freezing as bad, as it would without any flowing motion.
The overflow also doubles as a drain for the tank. You can pull out the part you see above. Then the water can flow out a pipe the same size as the visible overflow pipe.
When we drain a tank, we use a specially designed key to turn off a valve that controls water flow to the tank. The valve you turn on or off is called a stop and waste valve. It stops water from flowing to the tank, and "wastes" any water left in the pipe by allowing it to seep back into the ground, thus preventing the pipe from freezing. The key we use is several feet in length, because pipelines are several feet (5 feet for us) below ground. You drop the key down a pipe that "T's" onto the pipeline, work it onto the valve, and turn it to turn the valve on or off. 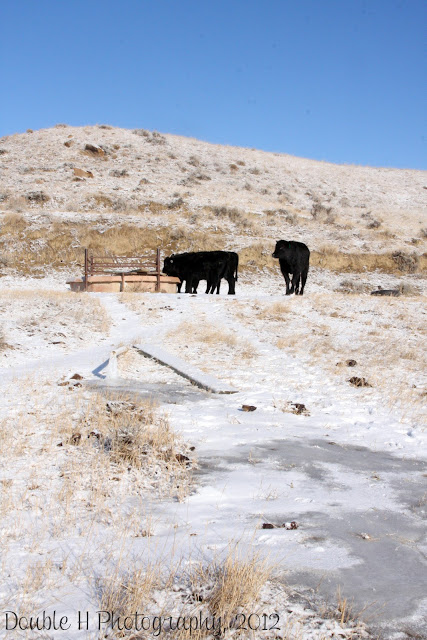 Where does this water that's flowing out go? Downhill. Here is one overflow example. The water flows out, away from the tank. Sometimes it creates ice, which can be bad in the winter for cattle, but we design each tank in a way that cattle can get to it with ease, and without crossing the ice. 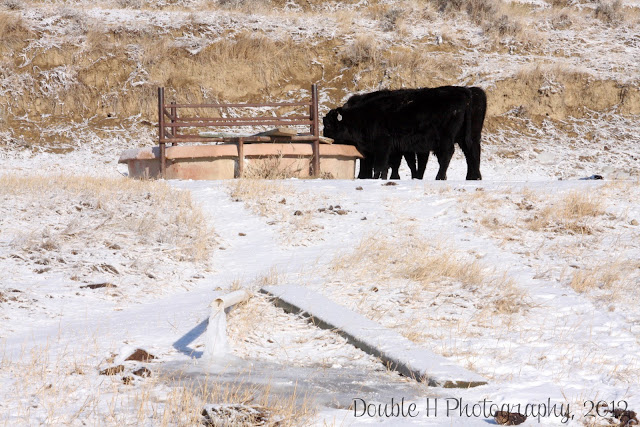 Here it is a little closer. The board is sitting there so we can see the overflow, and don't accidentally drive over it. The pipe "cage" on this tank is to keep livestock from crawling into the tank. 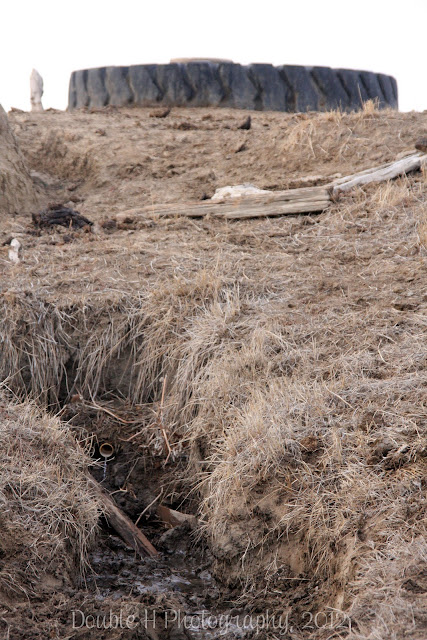 Here is a different tank's overflow. It goes down a little draw. The amount of water coming out of the pipe is about what we want to flow out of the overflow. This one doesn't ice up near the tank, and basically irrigates this little draw and provides additional water to a number of small and medium wildlife species that can't reach the tank, in addition to reducing how much ice we have to chop every day. Win win! 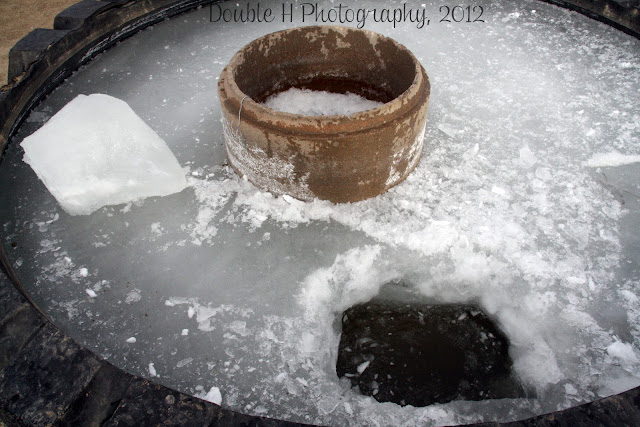 Here is a tank where the overflow wasn't working. We turned it on a while before we turned some cows into the pasture it's in, then didn't check it until the cows were turned in. The ice was 8-10 inches thick, and the cement ring was frozen solid. In these cases we get a bar, and pound all the ice out of the ring, then fix whatever we broke (and by "we," I mean my brother in this instance), then get it up and running again. 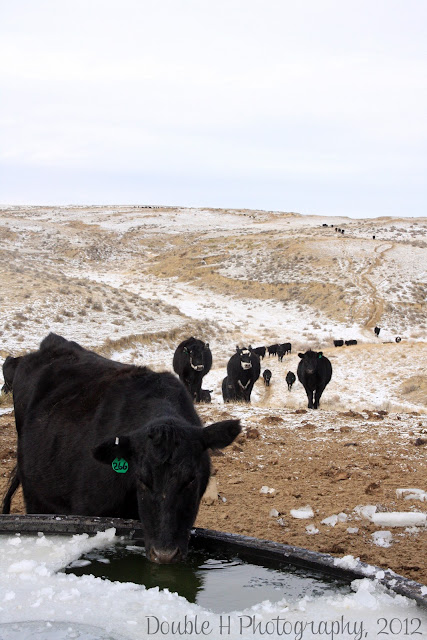 In contrast, here is how thick the ice is on a tank with a working overflow, in similar temperatures. Having cattle drinking out of a tank also reduces freezing, because the more water they drink, the more the tank has to refill, and the more movement of water that occurs.
Using tires for tanks also helps with ice because they're black, and absorb more heat than light colored tanks would.
As you've probably noticed, there is still ice to chop. In addition to the ideas we've implemented to reduce ice, we also check our livestock's water every day, and always have an ax and a shovel with us so we can chop ice and make sure they have water to drink. Where I'm from is considered very mild winter country, and in other parts of the state and country, ranchers have to chop a lot of ice every day, no matter what they do, because the weather is so cold.
As for algae/bacteria, yes we do have both, algae especially. Not as much in our black tire tanks, but the one I showed that wasn't a tire gets a lot of algae in it. We think this also has something to do with the colors of the tanks , and amount of sunlight the algae gets. My mom puts about a gallon of vinegar in it every so often to kill the algae.
We also empty most of our tanks when cattle aren't using them, and that controls algae and bacteria too.We use our water system to control the areas of a pasture that our cattle graze in, and turn tanks on and off to maximize the use of our grass, without overgrazing any specific area.
Thanks for asking, and I hope that helps answer your question!
Posted by doublehphoto at 8:49 AM